“The very least you can do in your life is figure out what you hope for. And the most you can do is live inside that hope. Not admire it from a distance but live right in it, under its roof.” Barbara Kingsolver

Doors Opening and Closing, an Analogy for Calcium Channels:  Carrie Newcomer sings “When one door closes another door opens wide/It’s hard to believe all of the locked doors I’ve tried.”  Each cell in our body requires nutrition and substances that deliver signals.  One such substance is calcium, a 2+ charged metal ion (like the Ion TV network slogan it is “positively” entertaining). Calcium uses cell-membrane-anchored channels to be transported from outside to inside the cell. Ion channels exist to selectively allow calcium the pathway into a cell.  Once inside the cell, calcium helps to promote muscle contraction, neurotransmission (signaling molecules released by a neuron and bind to and activate the receptors of another neuron), gene expression, and other types of actions known as signaling.  Therefore, when calcium is transported through a calcium-ion-channel, a whole series of cellular events are initiated, like a key-turning in a lock and opening a door. 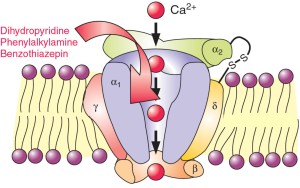 “And Now For Something Completely Different” (Monty Python): Maybe you’re thinking ‘What do calcium channel blocker (CCB) drugs have to do with Parkinson’s?’  In fact, my Neurologist and I have discussed this topic several times.  I offer the following as a possible explanation.

#1. Epidemiological Evidence. “L-Type Calcium Channel blockers and Parkinson’s Disease in Denmark” (http://www.ncbi.nlm.nih.gov/pmc/articles/PMC2917467/) was a paper published by Ritz and others that showed the use of CCB’s reduced the occurrence of Parkinson’s. They found that L-type calcium channel blockers, drugs that cross the brain blood brain barrier, lowered the risk of Parkinson’s when compared to those not taking these CCB’s (patients were matched for age, sex, and existing illnesses).  They speculate that CCB’s might be neuroprotective by “decreasing general cellular stress thereby attenuating the impact of environmental or genetic insults in aging dopamine producing neurons.”  Also see the study by Pasternak and others “Use of Calcium Channel Blockers and Parkinson’s Disease” http://aje.oxfordjournals.org/content/early/2012/03/01/aje.kwr362.full
[“Epidemiology is the science that studies the patterns, causes, and effects of health and disease conditions in defined populations. It is the cornerstone of public health, and informs policy decisions and evidence-based practice by identifying risk factors for disease and targets for preventive healthcare.” https://www.google.com/search?q=define+Epidemiological&ie=utf-8&oe=utf-8  ]

#2. Autopsy Evidence.  Scientists have speculated that excess cellular calcium could promote neuronal cell death. To test this hypothesis, Hurley and others compared the brains of patients who died of Parkinson’s compared to brains from people who died without neurological disease.  The types of calcium channels in the brains of those with Parkinson’s had a different pattern from the brains of those without neurological disease, in particular a calcium channel called Cav1.3.  They speculated that increased calcium transport, through these calcium channels, in dopamine-producing cells could cause cell damage leading to cell death [See Hurley MJ, Brandon B, Gentleman SM, Dexter DT (2013) Parkinson’s disease is associated with altered expression of CaV1 channels and calcium-binding proteins. Brain 136:2077–2097  http://dx.doi.org/10.1093/brain/awt134  and http://www.pdf.org/en/science_news/release/pr_1373985871 ].

#3. Clinical Trials. Dr. Surmeier started this whole area of research when he reported that over-active calcium channels could stress and potentially kill dopamine-producing cells.  An FDA-approved CCB named Isradipine has gained momentum in Parkinson’s research.  The hypothesis is that a blood brain barrier-penetrating CCB might be able to block calcium channels and preserve dopamine-making cells. Dr. Simuni has recently shown in clinical trials (Phase II)  that Isradipine is safe to use in patients with Parkinson’s (https://www.michaeljfox.org/foundation/grant-detail.php?grant_id=486 ).  Now the attention turns to a much larger and longer NIH-funded study, a Phase III clinical trial. The goal is to determine if Isradipine can slow the progression of the disease by keeping the brain’s dopamine-producing cells healthy (http://www.urmc.rochester.edu/news/story/index.cfm?id=4042 ).
[What are clinical trial phases? Go here for an explanation: http://www.nlm.nih.gov/services/ctphases.html ]

#1 + #2 + #3 = Hope.  We treat and manage our symptoms; currently, there is no cure for Parkinson’s.  When I re-read the work behind Isradipine, I remain hopeful that it has a chance to work.  Isradipine (CCB) may be a key to shut the door (calcium ion channel) on dopamine-producing cells to slow the progression of Parkinson’s. Medical research is about asking and then answering relevant (and important) questions. When one door closes another door opens wide, thus, I believe we are getting closer to finding treatment strategies for slowing the progression of Parkinson’s.

“If pain must come, may it come quickly. Because I have a life to live, and I need to live it in the best way possible. If he has to make a choice, may he make it now. Then I will either wait for him or forget him.” Paulo Coelho

11 Replies to “Isradipine: Shutting the Door on Calcium Channels to Slow the Progression of Parkinson’s”

© Frank Church and journeywithparkinsons.com/ [2015-present]. Unauthorized use and/or duplication of the written material without express and written permission from this site’s author and/or owner is strictly prohibited. Excerpts of written material may be used, provided that full and clear credit is given to Frank Church and journeywithparkinsons.com/ with appropriate and specific direction to the original content.
Follow Journey with Parkinson's on WordPress.com
%d bloggers like this: