Précis: Last month in London, England, at the Alzheimer’s Association International Conference (AAIC) 2017, there were several presentations focused on diet and the link with dementia/cognitive decline in the elderly population.  Two reports described the effect of specific diets [Mediterranean, DASH (Dietary Approaches to Stop Hypertension), MIND (Mediterranean-DASH Intervention for Neurodegenerative Delay), and NPDP (Nordic Prudent Dietary Pattern)] to maintain cognitive function in the aging population. In another study, the MIND diet was shown to reduce dementia in the women from the Women’s Health Initiative Memory Study (WHIMS).  Finally, it was shown that either the absence or excess of certain vitamins, minerals and other key nutrients could promote neuro-inflammation, which would be detrimental to the brain. This post reviews elements of these presentations.

“One should eat to live, not live to eat.” Moliere

A Healthy Body and Brain Combine Diet, Life-style, and Attitude: It is easy to say what it takes to be healthy; however, approaching/achieving/accomplishing it takes a concerted effort. In a minimal sense, achieving a healthy body and brain unites an efficient diet, an effective lifestyle, and a positive attitude.  Thus, a healthy body and brain requires a collective approach to living properly (and it helps to have good genes).

“Tell me what you eat, and I will tell you who you are.” Jean Anthelme Brillat-Savarin

Diet Linked to Neuro-inflammation: There’s an old phrase “You Are What You Eat”, which simply means it’s critical to eat good food in order to stay healthy and fit. Building on solid evidence that eating well is brain healthy, researchers are beginning to explore mechanisms through which dietary mechanisms may influence cognitive status and dementia risk. Dr. Gu and colleagues (Columbia University, New York) examined whether an inflammation-related nutrient pattern (INP) was associated with changes in cognitive function and structural changes in the brain. Gu, Y., et al. (An Inflammatory Nutrient Pattern Is Associated Both Structural and Cognitive Measures of Brain Aging in the Elderly) presented a follow-up study to earlier work using brain scans (MRI) combined with levels of inflammatory makers [C-reactive protein (CRP) and interleukin-6 (IL-6)] and cognitive function studies of >300 community-dwelling elderly people who were non-demented.

They created what was termed an “InflammatioN-related Pattern (INP) where increased levels of CRP and IL-6 were found in participants with low dietary intake of omega-3 polyunsaturated fatty acids, calcium, folate and several water- and fat-soluble vitamins (including B1, B2, B5, B6, D, and E) and increased consumption of cholesterol, beta-carotene and lutein. The INP was derived from a 61-item food frequency questionnaire that the study participants answered about their food intake during the past year. Study participants with this ‘INP-diet-pattern’ also had poorer executive function scores and smaller total brain gray matter volume compared to study participants with a healthier diet.  The strength of the study was the scientific precision and methodology; however, it was not directly comparing one diet to another.  Further studies are needed to verify the role of diet to induce neuro-inflammation-related changes in dementia (cognitive health).  Furthermore, mechanistic insight is needed to understand how a diet with either an absence or an excess of certain nutritional components promotes neuro-inflammation to alter brain function and structure. Their results imply that a poor diet promotes dementia and smaller brain volume in the aging brain through a neuro-inflammatory process.

“The food you eat can either be the safest and most powerful form of medicine, or the slowest form of poison.” Ann Wigmore

What is Good for Your Heart is Good for Your Brain: The Mediterranean diet, a diet of a type traditional in Mediterranean countries, characterized especially by a high consumption of vegetables and olive oil and moderate consumption of protein, is usually thought to confer healthy-heart benefits. The DASH (Dietary Approaches to Stop Hypertension) diet was developed to help improve cardiovascular health, especially hypertension. The DASH diet is simple: eat more fruits, vegetables, and low-fat dairy foods; cut back on foods that are high in saturated fat, cholesterol, and trans fats; eat more whole-grain foods, fish, poultry, and nuts; and limit sodium, sweets, sugary drinks, and red meats. Neurologists have merged the two diets, creating the Mediterranean-DASH Intervention for Neurodegenerative Delay, or MIND diet; testing the hypothesis that if it’s good for the heart it will be good for the brain.   The MIND diet is gaining attention for its potential positive effects on preserving cognitive function and reducing dementia risk in older individuals. In an earlier study, Morris et al. (Alzheimer’s Dement. 2015; 11:1015-22) found that  individuals on the MIND diet showed less cognitive decline as they aged.

Moving to 2017, Dr. McEvoy and colleagues (University of California, San Francisco) studied ~6000 older adults in the Health and Retirement Study. They showed that the study participants who followed either the MIND or the Mediterranean diets were more likely to maintain strong cognitive function in old age (McEvoy, C., et al. Neuroprotective Dietary Patterns Are Associated with Better Cognitive Performance in Older US Adults: The Health and Retirement Study). Their results also showed that study participants with either of these healthier diets had significant retention of cognitive function.

The doctor of the future will no longer treat the human frame with drugs, but rather will cure and prevent disease with nutrition.” Thomas A. Edison

Women on the MIND Diet are Less Likely to Develop Dementia: Dr. Hayden and colleagues (Wake Forest School of Medicine, Winston-Salem, North Carolina) studied diet and dementia in >7,000 participants from the Women’s Health Initiative Memory Study (WHIMS) (Hayden, K., et al. The Mind Diet and Incident Dementia, Findings from the Women’s Health Initiative Memory Study).   The study showed that older women who followed the MIND diet were less likely to develop dementia. These results were obtained by stratification of the WHIMS  participants from very likely to very unlikely to adhere to the MIND diet; they were  assessed for almost 10 years.  Their results imply that it may not require drastic diet changes to help preserve the aging brain.

Diet and Dementia in the Aging Brain: Four different studies with similar results; diet can  influence dementia and cognitive function in the aging brain.  The single most important finding in these studies was simply that a good diet helps maintain a healthy brain. Strong evidence was presented in three of the studies that the Mediterranean, the MIND and NPBP are excellent diets to help maintain cognitive function as we age.  Mechanistic studies to further demonstrate the link of dietary components with an increase in neuro-inflammation  would be most interesting. A confounding issue is that overall health and a healthy brain are more than just diet alone.  To reduce the chance of cognitive decline and dementia, it’s important to remember as we get older to protect our brain by eating well, exercise regularly, and exercise our brain by becoming lifelong learners (see Word Cloud below). 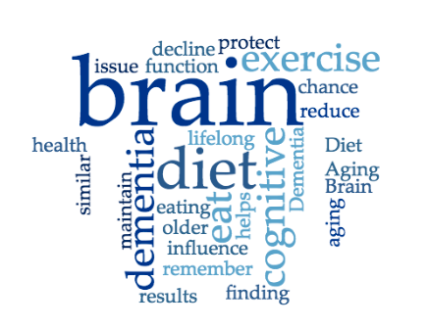 “The older I get, the more vegetables I eat. I can’t stress that more. Eating healthy really affects my work. You not only need to be physically prepared, but mentally and spiritually.” James Badge Dale

One Reply to “﻿Diet and Dementia (Cognitive Decline) in the Aging”