“The excitement of vitamins, nutrition and metabolism permeated the environment.” Paul D. Boyer

“A substance that makes you ill if you don’t eat it.” Albert Szent-Gyorgy

Introduction: Claire McLean, an amazing-PT who is vital to my life managing my Parkinson’s, posted a very interesting article about the generation of homocysteine from the metabolism of levodopa to dopamine in the brain. Here is the article:

This was all a very new concept to me. And as an ‘old-time’ biochemist by training, it led me down a trail of wonderful biochemical pathways and definitely a story worth retelling  for anyone taking carbidopa/levodopa.  Excessive generation of homocysteine leads to something called hyper-homocysteinuria, which is very detrimental to the cardiovascular system and even the neurological system.  Over time this could lead to a depletion of several B vitamins, which themselves would have biochemical consequences. This post is about the supplementation with a complex of B vitamins (including a cautionary note) during long-term therapy with carbidopa/levodopa.

“There are living systems; there is no ‘living matter’.” Jacques Monod

Here are the structures of the main players (top-left panel is levodopa; top-right panel is carbidopa; and the most commonly used dose is 25/100 immediate release carbidopa-levodopa (tablet with 25 mg carbidopa and 100 mg levodopa) on the bottom panel.

“The quality of your life is dependent upon the quality of the life of your cells. If the bloodstream is filled with waste products, the resulting environment does not promote a strong, vibrant, healthy cell life-nor a biochemistry capable of creating a balanced emotional life for an individual.” Tony Robbins

What’s the big deal about homocyteine (Hcy)?  Homocysteine is a sulfur-containing amino acid formed by demethylation of the essential amino acid methionine. Methionine is first modified to form S-adenosylmethionine (SAM), the direct precursor of Hcy,  This is important because SAM serves as a methyl-group “donor” in almost all biochemical pathways that need methylation (see figure below).  There are pathways that Hcy follows; importantly, the B vitamins of B6, B12 and folic acid are required for proper recycling/processing of Hcy.   An abnormal increase in levels of Hcy says that some disruption of this cycle has occurred.     Elevated Hcy is associated with a wide range of clinical manifestations, mostly affecting the central nervous system. Elevated Hcy has also been associated with an increased risk for atherosclerotic and thrombotic vascular diseases.  The mechanism for how Hcy damages tissues and cells remains under study; however, many favor the notion that excess Hcy increases oxidative stress.  As you might see why from the figure below, Hcy concentrations may increase as a result of deficiency in folate, vitamin B6 or B12. To recap, Hcy is a key biochemical metabolite focused in the essential methyl-donor pathway, whereby successful utilization of Hcy requires a role for complex B vitamins.  By contrast,  there is substantial evidence for a role of elevated Hcy as a disease risk factor for the cardiovascular and central nervous systems. 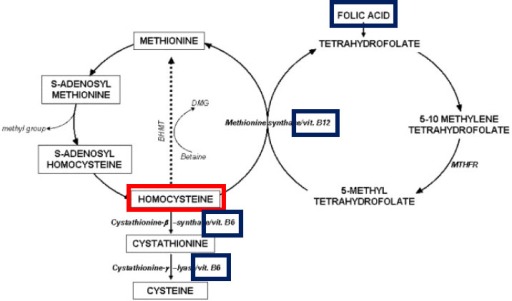 “We need truth to grow in the same way that we need vitamins, affection and love.” Gary Zukav

Sustained use of carbidopa/levodopa can result in elevated levels of homocysteine: As shown below, one of the reactions on levodopa involves methylation to form a compound named 3-O-methyldopa (3-OMD).   The reaction involves the enzyme catechol-O-methyl-transferase (COMT) and requires SAM as the methyl group donor. There is evidence that plasma Hcy levels are higher in carbidopa/levodopa-treated Parkinson’s patients when compared to controls and untreated Parkinson’s patients.  Interpretation of these results suggest the elevated Hcy levels is due to the drug itself and not from Parkinson’s.

“1914…Dr. Joseph Goldberger had proven that (pellagra) was related to diet, and later showed that it could be prevented by simply eating liver or yeast. But it wasn’t until the 1940’s…that the ‘modern’ medical world fully accepted pellagra as a vitamin B deficiency.” G. Edward Griffin

Beware of taking a huge excess of vitamin B6 in the presence of carbidopa/levodopa, a cautionary tale: I started taking a supplement that had relatively large amounts of complex B vitamins  (specifically the one labeled number two below) had 100% (400 mcg) folate, 1667% (100 mcg) vitamin B12 and 5000% (100 mg) of vitamin B6 (based on daily requirement from our diet).   Over a period of several days I started feeling stiffer, weaker as if  my medicine had stopped treating my Parkinson’s. I especially noticed it one day while playing golf because I had lost significant yardage on my shots, I was breathing heavily, and I was totally out of sync with my golf swing.  Just in general, my entire body was not functioning well.  Timing wise, I was taking the complex B vitamin pill with my early morning carbidopa/levodopa pill on an empty stomach. Something was suddenly (not subtly) wrong with the way I was feeling, and the only new addition to my treatment strategy was this complex B  vitamin pill. There had to be an explanation.

I went home and started thinking like a biochemist, started searching the Internet as an academic scientist, and found the answer in the old archives of the literature.  The older literature says taking more than 15 mg of vitamin B6 daily could compromise the effectiveness of carbidopa to protect levodopa from being activated in the tissues. Thus, I may have been compromising at least one or more doses of levodopa daily by taking 100 mg of vitamin B6 daily.  Let me further say I found that the half-life of vitamin B6 was 55 hours; furthermore, assuming 3L of plasma to absorb the vitamin B6, and a daily dose of 100 mg I plotted the vitamin B6 levels in my bloodstream. The calculation is based on a simple, single compartment elimination model assuming 100% absorbance that happens immediately. The equation is: concentration in plasma (µg/ml vitamin B6) = dose/volume * e^(-k*t) : 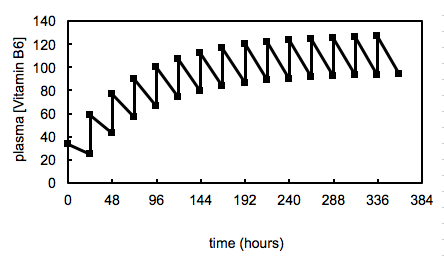 And further inspection of the possible reaction properties between vitamin B6, carbidopa and even levodopa suggests that vitamin B6 could be forming a Schiff Base, which would totally compromise the ability of either compound to function biologically (this is illustrated below).   And I should have known this because some of my earliest publications studied the binding site of various proteins and they were identified using vitamin B6 modifying the amino groups of the proteins (we were mapping heparin-binding sites):

“…The Chinese in the 9th century AD utilized a book entitled The Thousand Golden Prescriptions, which described how rice polish could be used to cure beri~beri, as well as other nutritional approaches to the prevention and treatment of disease. It was not until twelve centuries later that the cure for beri~beri was discovered in the West, and it acknowledged to be a vitamin B-1 deficiency disease.” Jeffrey Bland

To take or not to take, complex B vitamin supplementation:  I literally have been writing and working on this post since July; it started as a simple story about the use of complex B vitamins to reduce homocysteine levels as a consequence of chronic carbidopa/levodopa use to manage Parkinson’s.   If you eat a good healthy diet you’re getting plenty of B vitamins. Do you need mega-doses of complex B vitamins? My cautionary note described taking very large amounts of vitamin B6 may be compromising both carbidopa and/or levodopa. You should talk with your Neurologist because it’s straightforward to measure folate, vitamin B6 and B12, and homocysteine levels to see if they are in the normal range if you are taking carbidopa/levodopa. The hidden subplot behind the story is the growing awareness and importance of managing homocysteine levels and also knowing the levels of folate, B6 and B12 to help maintain your neurological health.  Bottom line, if you need it, take a multiple vitamin with only 100 to 200% of your daily need of vitamin B6 (what is shown in panel three and four above). And please be careful if you decide to take a larger dose of vitamin B6 (between 10-100 mg/day).

“A risk-free life is far from being a healthy life. To begin with, the very word “risk” implies worry, and people who worry about every bite of food, sip of water, the air they breathe, the gym sessions they have missed, and the minutiae of vitamin doses are not sending positive signals to their cells. A stressful day sends constant negative messaging to the feedback loop and popping a vitamin pill or choosing whole wheat bread instead of white bread does close to zero to change that.” Deepak Chopra

5 Replies to “﻿B Vitamins (Folate, B6, B12) Reduce Homocysteine Levels Produced by Carbidopa/Levodopa ﻿Therapy﻿”